skip to main | skip to sidebar

The Aqua-librium exhibition, 9 - 18 December 2011, will feature works from my Strain project, developed over the last five months whilst a studio artist at Primrose Park.


Ferns, weeds and mosses have been collected and transplanted short distances within Primrose Park then carefully combined with domestic gardening materials to form micro futuristic landscapes. Some hang suspended from the ancient rusted hooks of the sewage works’ structures, whilst others follow undulations under the aqueduct arches. I have also worked with weeds growing naturally in crumbling fault-line cracks in the concrete walls.


Stain reflection on human relationships with nature, focusing on the past and present attempts to control the flow of water in Primrose Park. The site was originally a food bowl for the Cammeraygal people, a fertile estuary bay where a number of streams converged to enter the harbour.


In 1891 the tidal marshland was filled in and ‘reclaimed’ to house North Sydney’s first sewage treatment works. Water was an intrinsic part of these early waste management strategies so natural streams were redirected through the concrete aqueducts, canals and industrial structures. A generation later the area was converted into a sports-ground and still today, during heavy rainfall, masses of storm-water flushes through the site and weeds run rampant.


Strain explores what we value about water and plants, contrasting what we waste and consider to be waste. Water is highly valued when it in short supply, but when there is too much we can’t get rid of it fast enough. The movement of water is both a creative and destructive force, eroding and forcing its way through concrete surfaces, spreading fertile topsoil and weeds.


Most weeds were originally introduced to fill out decorative domestic gardens, but when they have escaped the picket fence, our view of them changes from 'plant' to 'pest'. However, there is something about the tenacious character of these fugitive plants that appeals to me. Primrose Park has an abundant supply of weeds, thanks to the inexorable natural flow of water from the elevated suburbs down into the harbour below and the fertile soil redolent of the sewage works. My locally relocated weeds are playfully combined with the domestic gardening practice of using stockings and pantyhose to direct the growth of plants, gently binding seedlings to stakes as they grow.

This material is closely associated with human skin, as pantyhose are usually worn against the skin clinging to the bumps and lumps of our legs, thighs and bottoms.  Like our skin,   pantyhose sheer nylon ages and tears, wrinkling and sagging as it loses its elasticity.


The staging of pantyhose as artwork in this public place is akin to publicly airing dirty underwear, almost a violation of social norms verging on infringement of taboos. My use of this material within the historic sewage works, metaphorically comments on our avoidance of discussing the specific environmental impact of our ever increasing human natural waste – sewage.

Email ThisBlogThis!Share to TwitterShare to FacebookShare to Pinterest
Newer Post Older Post Home
My home and studio are on the lands of the Gadigal and Wangal people of the Eora Nation. I recognise their continuing connection to land, waters and culture – and pay my respects to their elders past, present and emerging – acknowledging them as the traditional custodians of knowledge for these places.

...this blog is updated with current developments from my studio, exhibitions, residencies, research, curatorial, arts writing and wider practice. If you would like to receive regular email updates please signup to "follow" below. Or to see my portfolio please go to www.kathfries.com 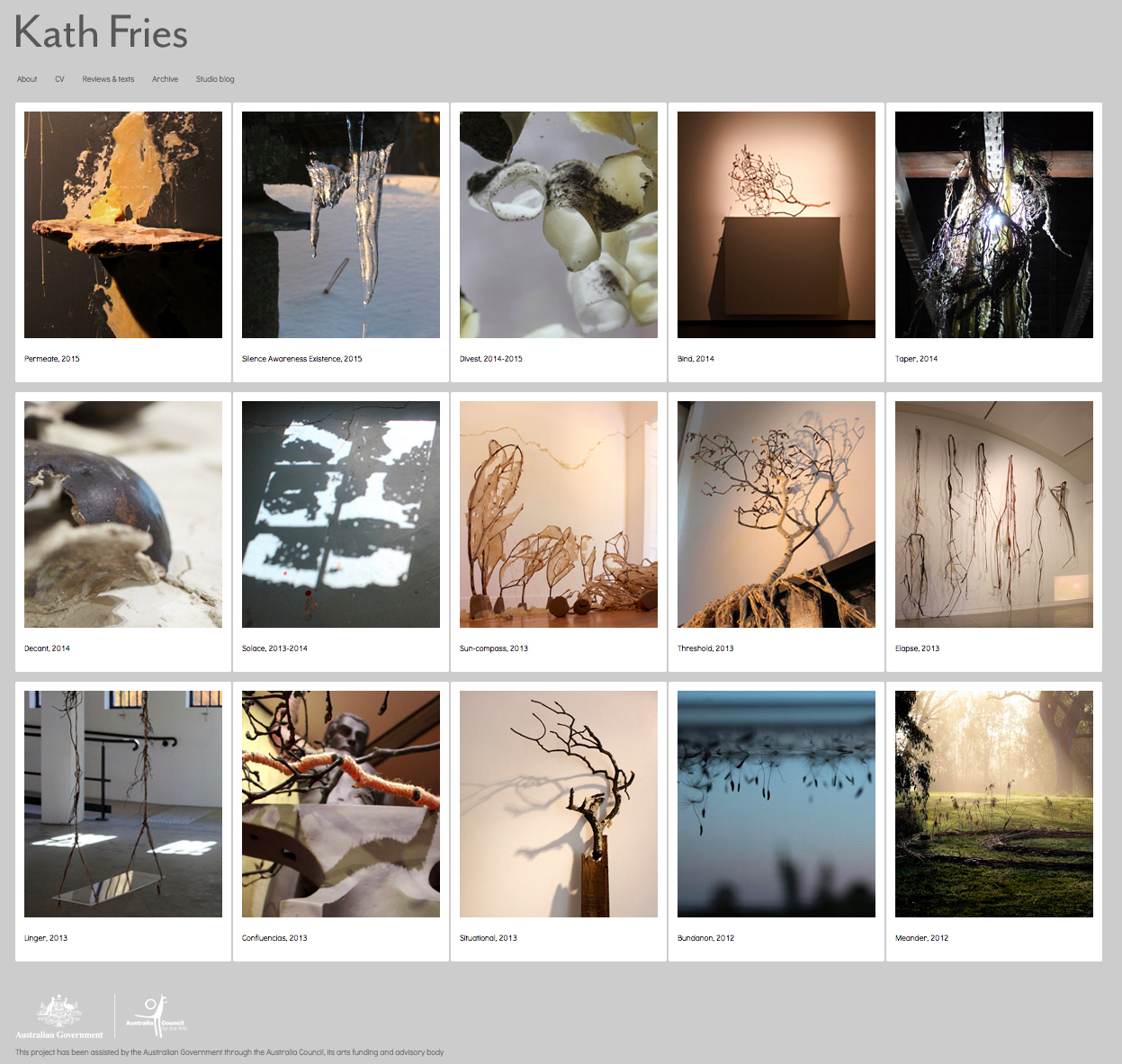 Kath Fries
I'm an artist based in Sydney, Australia. My practice explores how our senses connect us to our surroundings, engaging with the immediacy of present time experience and the impermanence of existence. Working with tactile materials and embodied entanglements with place, my sculptural installations grow from a process of quiet observation to reflect on instability and fragility. By developing attentive focus and working with found, natural or everyday materials, I link sensate experiences of materiality and haptic thinking to evoke direct empathetic and palpable experiences of time, fluctuation and change. www.kathfries.com